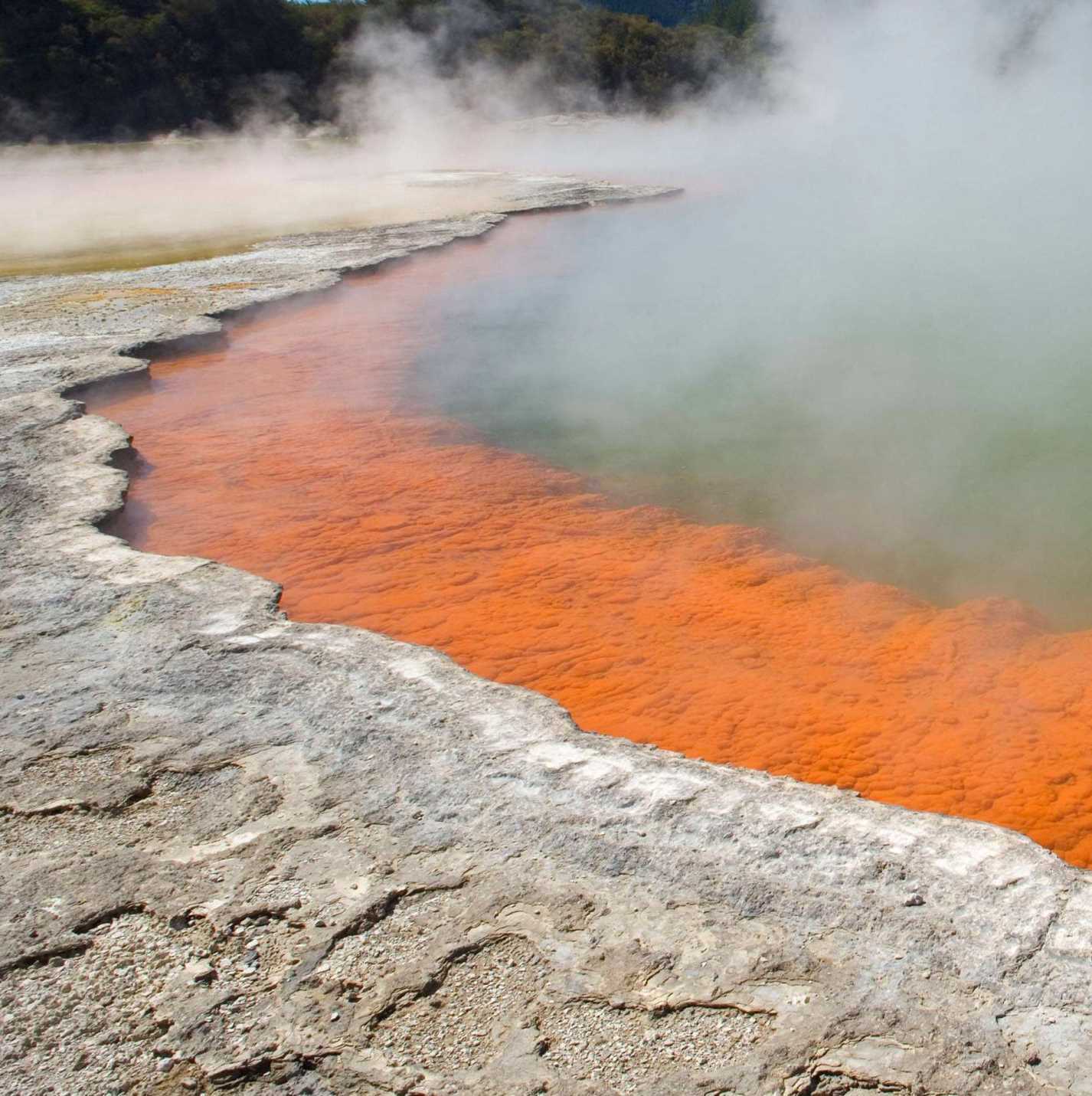 The diagram below depicts how our sampling, processing, analysis and computing methodologies are applied to make data available on the internet as quickly as possible. The various analyses techniques used in this project have been described in more detail in the adjacent tabs. 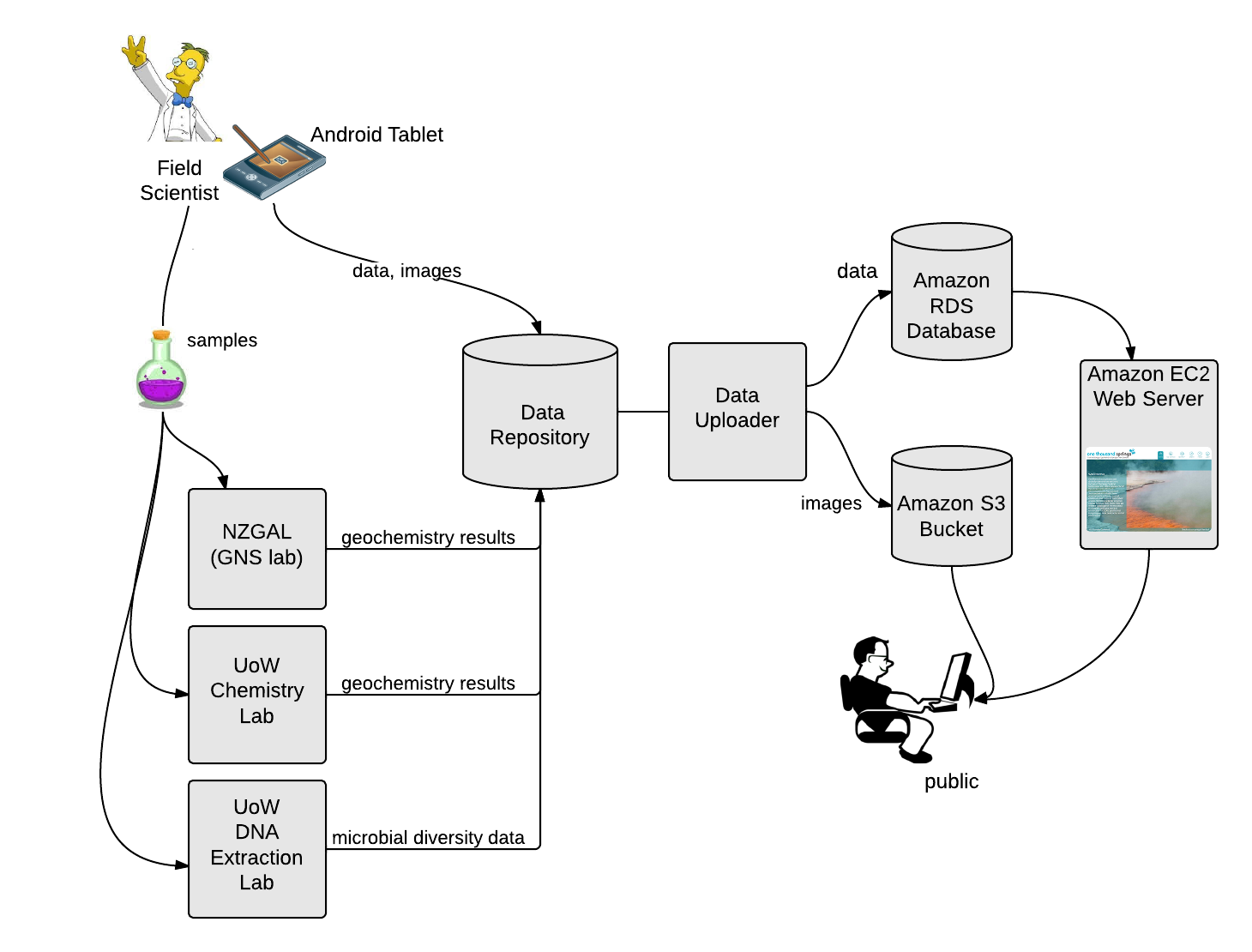 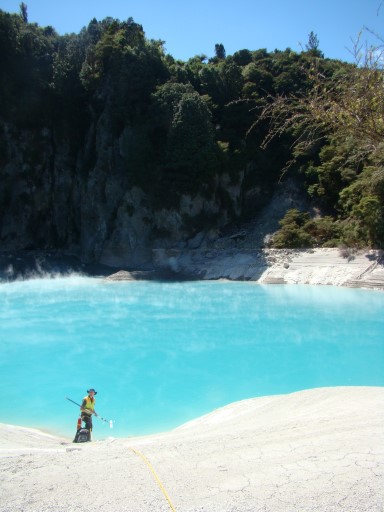 We are aiming to sample as broad a cross section of physicochemical conditions presented by geothermally-influenced springs within the Taupō Volcanic Zone as possible. In this research, we sample only the water columns of springs and not the sediments, biofilms, mudpots or heated-soils. We are aiming to collect 1000 samples which in the majority of cases are from individual features. However, in some cases, we have repeated sampling of the same feature where physicochemical conditions are known to vary, are being targeted for a longer term temporal study or for quality control reasons.

As part of this project we have developed a field tablet (see image) and a custom-built app to allow us to record physical, chemical and other metadata in the field. This avoids having to double-handle notes scribbled in the field and reduces the number of transcribing errors. If you’d like to know more about the field tablet and associated software, please contact us. The physical and chemical data we generate in the field are described elsewhere link. The metadata we record are the feature type (spring, stream etc.), area description, sampling date and sampling staff, feature location, GPS location, spring size, ebullition (bubbling/water up flow), and spring colour. We also take images and draw a ‘bird’s-eye-view’ of the spring to facilitate resampling in the future using the tablet. 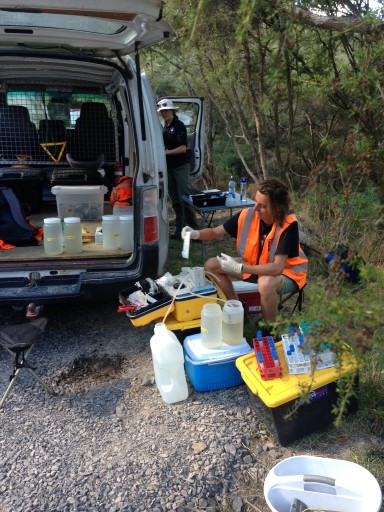 We aim to process samples as soon as possible to minimise any effects due to temperature or dissolved oxygen changes, or microbial activity. Samples to our 4WD field van which has been set up as a mobile laboratory. A field multiparameter meter (Hanna) is calibrated and used to measure pH, oxidation-reduction potential (ORP or redox), conductivity (a proxy for salinity), total dissolved solids, turbidity and dissolved oxygen from the (tightly-sealed) PP 500 mL bottle. Ferrous iron is immediately measured using a field spectrophotometer (Wilson, 1960).

Microorganisms are collected via filtration. A battery operated peristaltic pump pushes up to 2 L of sample through a 0.2 µm Sterivex column filter (Millipore). After a lot of field testing we found that Sterivex filters had a higher filtration volume capacity compared to all other filter types we tested. Filtrate water was collected in 15 mL and 50 mL tubes for other chemistry analyses, detailed below. All filtrate water samples, filters and soil samples are cooled to 4 °C and transported immediately back to the laboratory in Wairakei where they are then stored as listed below until sent for analysis.

All chemistry analyses are performed at either the New Zealand Geothermal Analytical Laboratory (NZGAL) or the Extremophile Research Group (both at GNS Science), or the University of Waikato’s School of Science. Also all the metadata recorded on the tablet by the field table is uploaded to the database, where it instantly appears on the website. 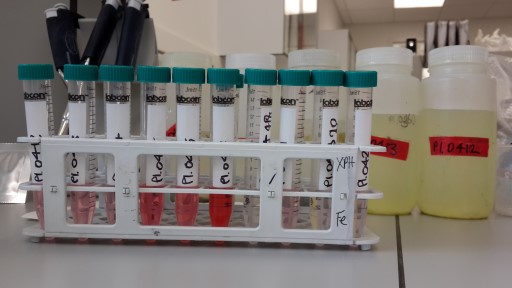 Sometimes weather conditions, location of the hot spring or the nature of the sample can result in processing being performed in the laboratory. Many of the hot springs are geographically situated within a 20 km radius of GNS Science. Some of the samples are high in particulate matter and need time to settle before filtering.

The below table lists processing steps of samples and standard analytical methods used to measure the different variables.

Wilson, A.D. 1960. The micro-determination of ferrous iron in silicate minerals by a volumetric and a colorimetric method. Analyst, 85, 823-827.

The number of microorganisms in soil and in freshwater can be upward of one billion cells and ten million cells respectively (Whitman et al., 1998). It is therefore difficult to count and impossible to determine the identities of all the bacteria and archaea in a geothermal hotspring sample. To determine the diversity of the microorganisms inhabiting a spring, we extract the total microbial DNA content filtered from the sample. We then read and compare the DNA sequence of gene universal to all life. The order of the nucleotides in this gene can be used to catagorise the microorganism it was retrieved from into a taxonomic category. We use Next-Generation Sequencing (NGS) technology (Ion Torrent) to sequence large numbers of sequences from multiple samples in parallel 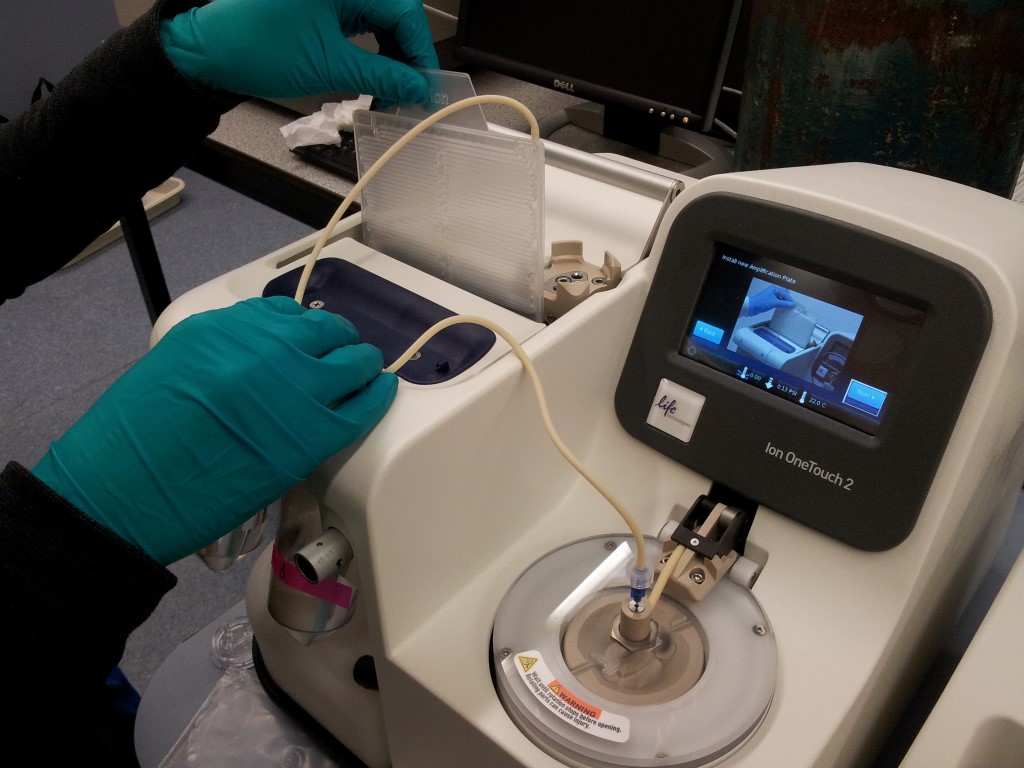 Summary: DNA can be extracted, purified and concentrated from microorganisms using a combination of chemical and physical techniques. Prior to cell disruption, we block possible binding sites on any solids/sediments captured in the filtration process with sterile skim milk. We then disrupt the captured cells in the Sterivex filter using cetyl trimethylammonium bromide (CTAB), and then chemically remove the proteins, lipids and ribonucleic acids (RNA) using a phenol-chloroform-isoamyl alcohol and chloroform-isoamyl alcohol. The DNA is then concentrated via a magnetic bead-adsorption protocol.

DNA amplification and preparation for Next Generation Sequencing 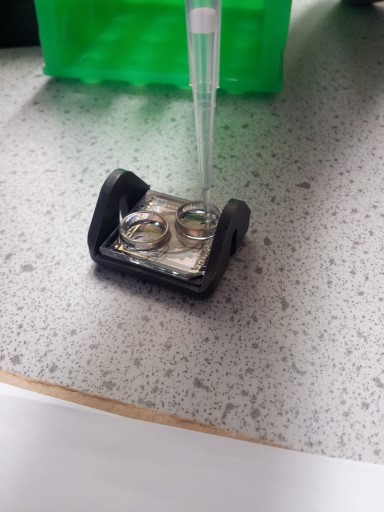 Summary: We determine the microbial diversity of each sample by sequencing (reading) the DNA code of a short gene that is possessed by all life called the small subunit of the ribosomal RNA (SSU rRNA). In bacteria and archaea, this is called the 16S rRNA gene and is approximately 1540 nucleotides long (in eukaryotes including humans it is called the 18S rRNA gene and is ~ 1870 nt). The total DNA content is extracted and the 16S rRNA genes of all resident bacteria and archaea is amplified using the Polymerase Chain Reaction (PCR) modified to facilitate NGS using the Ion Torrent . On average approximately 70,000 sequences (~270 bp in length) were read per sample.

Summary: The raw sequences (on average 70,000 reads per sample) are too many to curate by hand and are instead handled by customised bioinformatic pipelines. Firstly, the raw sequences are curated to remove erroneous reads (too long or too short) and any tagging DNA sequences that were added as part of the sequencing process removed. The sequences are then screened for known errors and trimmed to 250 bp in length. Similar sequences are then grouped (groups have a sequence similarity of 97 %) into groups called Operational Taxonomic Units (OTUs) which can, for simplicity, be considered synonymous with a taxonomic species classification, although this is not technically correct. The OTUs are then taxonomically ranked by comparing the OTU sequences with microbial taxonomic databases. The OTU taxonomies and abundances within a sample can be represented in a number of ways. It should be noted that for the purposes of this website OTUs with abundances of >5 reads per sample have not been presented graphically for cl

Technical Details:The raw reads in FASTQ format were processed using a custom pipeline based on Mothur (Schloss et al, 2009) and USEARCH (Edgar, 2013). Reads with lengths outside the 275-345 bp range were removed, as were reads with any error in the barcode and forward PCR primer sequences. The barcode and forward primer sequences were removed from the remaining reads, which were subjected to Q-score-based filtering to remove those with ≥3 expected errors. The reads were globally trimmed to 250 bp. After de-replication, unique reads were sorted based on their associated abundance. USEARCH was used to generate OTUs using centroid-based clustering (97% similarity threshold) and remove chimeras. OTUs were taxonomically assigned from their representative reads using the RDP Classifier in conjunction with RDP Release 11.2 (Wang et al, 2007). 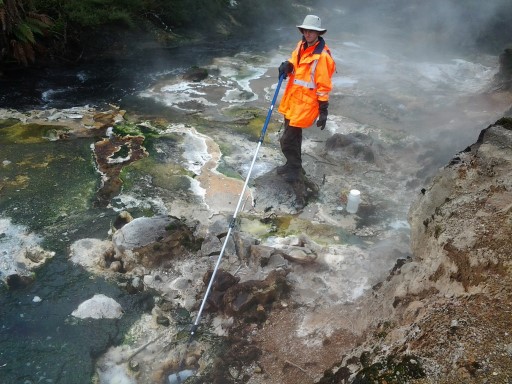 Please note here that sampling springs in geothermal environments is dangerous and should not be attempted. Ground surrounding hotsprings can be hot, unstable and undercut. Springs also often emit high concentrations of toxic and/or asphyxiating gases. If visiting a geothermal environment, do not leave formed tracks and do not approach springs or steaming soils. All people involved in this project have extensive experience in moving through and sampling geothermal ecosystems. In all cases, we attempted to minimise any impact of sampling on the surrounding environment.

For those interested, we have listed here the PPE and H&S measures we employ during sampling. We carry a H&S emergency bag which includes a satellite phone, locator beacon and laminated information sheets including emergency contacts, locations, recommended PPE, and hazards applicable to each site. We also have a comprehensive burns kit with a full body gel blanket, a 1st aid kit, collapsible bucket, water bladder, modified throwbag, gas monitor and GPS. We prefer to wear leather boots topped with neoprene putty’s (like gaters) over using gumboots. We also wear locally-made Cactus SuperTrousers to protect against vegetation and slow the infiltration of water/mud if an accident occurs. 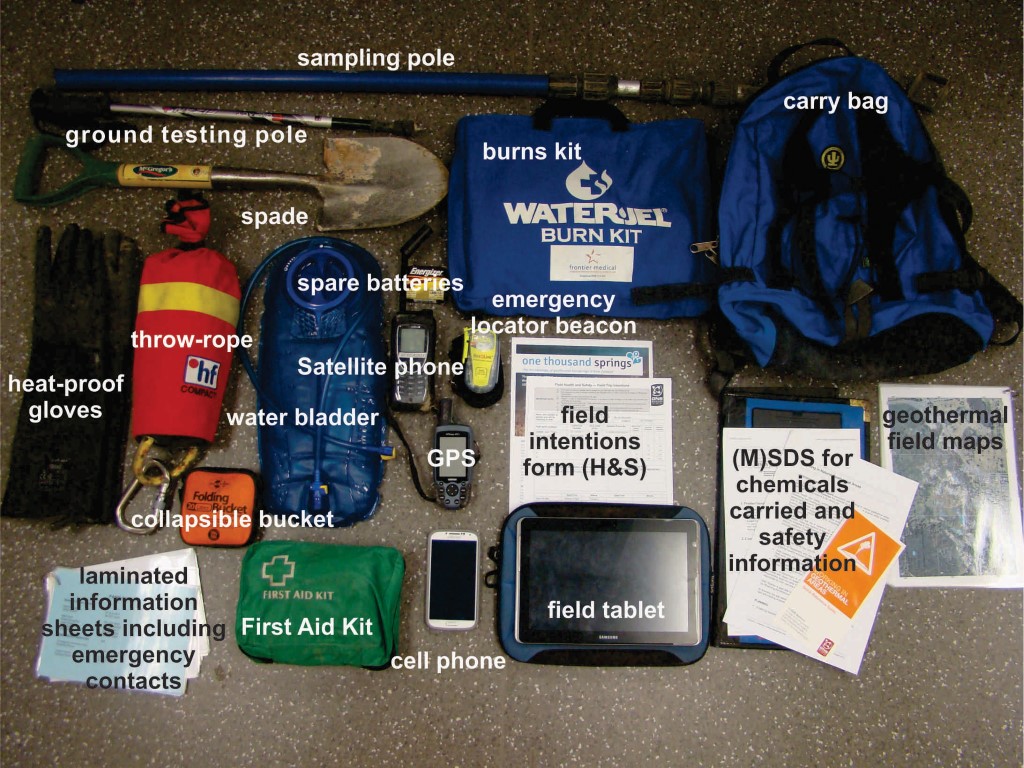